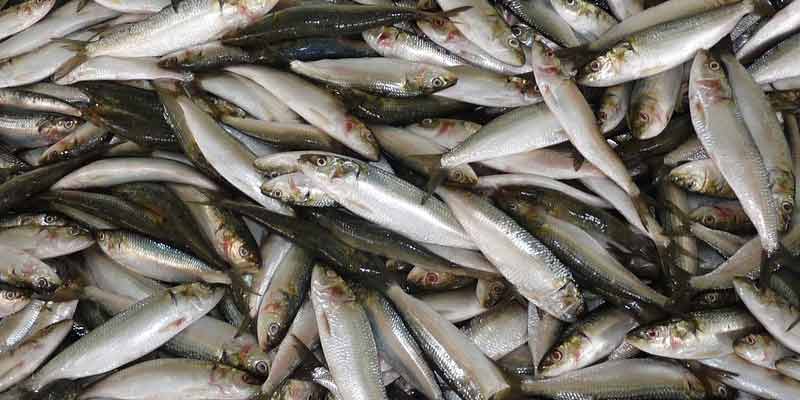 Fish is popular seafood for many people around the world. It’s high in protein and a lot of other nutrition. Fish is also very versatile and can be cooked in many ways. For humans, fish are safe to eat and offer many health benefits. As for chickens, can they eat fish too?

Can chickens eat fish? Yes, chickens can eat fish, both cooked and raw. Fish is packed with proteins, calcium, and plenty of other nutrition. Chickens can gain a lot of health benefits from eating fish.

Is There Any Danger To Feeding Fish To Chickens?

Fish are safe and healthy for chickens to eat. They can eat both raw or cooked fish. Some part of the fish like the organs makes an excellent meal for chickens.

Fish are nutritious, especially protein. Most fish have about 16-30% of protein.

The only danger you need to worry about is the mercury that’s in the fish. Chickens are at risk of mercury poisoning from eating fish. Some species of fish have a higher level amount of mercury than others.

Fish like marlin, shark, king mackerel, tilefish, swordfish, and orange roughy are likely to have a high amount of mercury level.

Tuna is another fish that has mercury, but the tuna will need to be consumed in large amounts to cause mercury poisoning to the chickens.

Mercury poisoning is worse for chickens than for humans. Just a small amount of mercury in their system could cause them harm, even death can occur.

To prevent mercury poisoning, there are some fish species that you can offer your chickens. These include sardines, tilapia, pollock, cod, and sardine.

Yes, chickens can eat fish bones, but there may be safety issues. Fish bones are usually hard and have a sharp tip. This could get lodged in the throat of the chicken or even puncture it.

Generally, large, sharp bones carry more risk than smaller ones. These larger bones can be stuck in their throat and could also cause crop impaction.

To avoid any issues, it’s recommended to remove any large bones from the fish before feeding them to the chickens.

Alternatively, you can remove the bones from the fish and crush them into pieces before giving them to your chickens.

If you are worried about your chickens eating fish bones, you can offer them sardines. These fish have soft bones which are easy for them to digest, and it crumbles easily.

When it comes to canned fish, you should avoid giving it to your chickens.

Usually, canned fish will have additives, preservatives, and seasoning adds to it. The fish itself will not be any issues for the chickens, but the additives may.

Substances like oils, salt, sugar, and sauce, are commonly used as additives to keep the canned fish from spoiling and to last for a long time.

While these substances are edible to the chickens, they are not safe for them due to the excessive amount that it has.

Chickens can safely eat cooked fish. The fish can be boiled, poached, grilled, or baked. You can cook it in any way you like as long as you don’t add oil or seasonings.

You can feed the fish to the chickens as a whole. They will peck and each the flesh of the fish. You may want to remove the fish bones too if they are large and sharp.

Another way is to chop the fish into smaller pieces. Again, be sure to remove any large fish bones first before giving the fish to your chickens.

Never feed spoiled fish to your chickens. Doing so will cause them to become sick, even worse, they could die.

Once the fish is spoiled, it will have bad bacteria and parasites growing in it. All of this is dangerous for the chickens to eat.

Letting the chicken eat spoiled fish will put them at risk of various diseases and food poisoning.

Chickens don’t have a very good sense of smell, so they are unable to determine if the fish is spoiled or not.

Therefore, always make sure to discard the fish if it’s spoiled. The signs of spoiled fish will be discoloration and the usual stench that the fish gives off.

How Do You Prepare Fish For Your Chickens?

When it comes to feeding fish to the chickens, you can prepare it in any way you like. Just make sure the fish bones are removed before feeding them to the chickens.

You can place the whole fish on the ground for the chickens to eat. They will peck at the flesh and eat it.

Another way is to cut the fish into smaller pieces. This should be done for fish that are large like salmon and cod. For smaller fish like sardines, you can cut them in halves, but it’s unnecessary to do so.

If you want to save money on chicken feeds, you can add fish to their feeds. Not only will you save some money, but the chickens will get an extra boost in nutrition, especially protein.

How Many Fish Can a Chicken Eat?

Whether the fish is cooked or raw, you should feed them in small quantities.

For baby chickens, a small piece of fish is enough for them to enjoy without causing any harm. Make sure to remove any fish bones, whether it’s small or large before feeding them to the chicks.

For adult chickens, you can give them one medium size fish or half of a large-sized fish.

How Often To Feed Fish To Chickens?

Fish are safe to feed your chickens, but it doesn’t have all the necessary nutrition to meet your chicken’s daily dietary needs. Fish should be fed to them as a treat which means once or twice per week.

Fish should only make up 10% of their entire diet. The rest should come in the form of commercial feeds. These feeds have been formulated with the right amount of nutrition to keep your chicken healthy and strong.

Other Seafood That Chickens Can Eat

Shrimp makes a good treat for giving the chickens. It’s full of nutrition that the chickens can benefit from. When it comes to feeding shrimp to them, only feed them cooked shrimp. Raw shrimp have a greater chance of having bacteria which could make your chickens sick.

Clams are another good choice of seafood to feed the chickens. It’s high in protein and vitamin C, which can benefit the chicken’s health. Only feed cooked clams to the chickens. Feeding raw clams could risk them having bacterial infections.

If you’re planning to feed your chickens fish, you have nothing to worry about. Fish is healthy and safe for them to eat. You can feed almost all parts of the fish to them without any issues. Just remember to remove the fish bones from the fish before serving them to the chickens.